During this weekend (27.-29.7.) Linguadedron organized a Language Jam. For once I was available, so I thought I would participate. I signed up for 24h challenge, because I didn’t want to stress too much about it. Here is my experience of learning Afrikaans for 24 hours.

So what is this Language Jam thing?

The Language Jam lasted for 3 days. You could sign up for 24h, 48h, or 72h challenge. You could use all of this time or you could have a life. You can do this the way you want. When you sign up, you need to choose the length of the challenge. They also ask you to list languages that you’ve studied or even dabbled in, so that you get something completely new. You can restrict your participation to latin script or non-latin script languages or not restrict it and you get whatever.

My original thoughts on the challenge

When I heard about the challenge, I thought it was awesome! I find many language related challenges more hard work than fun. And while hard work is what pays off in language learning, sometimes it’s nice not to add to the stress, but do something totally random with no pressure. The best point of this challenge was, that it was about a new language, a language you hadn’t studied or dabbled in. So you could see it as a taster. You get a language and you don’t have to continue the work, if you have no motivation. This was why I jumped right in and signed up.

I signed up for 24h, because I thought this would be the least stressful choice. I also decided to go with no restrictions and I got my language on 26.7.: Afrikaans. This was not something that I would’ve chosen to study, so first I was a bit disappointed. What I mostly think when I think of South Africa was the apartheid that continued to early 90s. And this was the language of the oppressor. In addition, the language is very close to German that I’ve been studying and I was looking forward to study something a bit further away from the main European languages. Like Hindi or Thai for example.

There was a loophole though: if you really don’t like your language, you could let them know and they draw you another one and you can choose from the two. I decided to go with what I got, since to me this was part of the fun of the challenge: The one thing you can’t control. And while I would be really interested to learn some of Africa’s native languages, I decided to look this from the different angle. Language is not what caused the apartheid and the people who speak it today are the people who voted to end it. Or even were born after the end of it.

And I’m quite happy of that decision in the end.

First I thought, that especially since I was a bit of disappointed in the language choice, I should do a bit of research on it. And I thought this would help me to overcome my prejudice on the language. After all, one could say the same thing about German: I don’t want to speak it because of the Nazis. But then you would miss so much! And the understanding that Germany is so much more than those ~10 years or so in it’s history. So, I googled.

Here’s a pretty good summary about Afrikaans and the history of it by Paul at Lang Focus:

I also learned that Afrikaans was not only the language of the oppressor, but had also a huge role in the end of apartheid. There is still a discussion going on about this. One interesting point of view that I heard was Whose Language? Afrikaans in Post-Apartheid South Africa. The idea is “you can’t blame a language for what a group of people did with it”. In the end, a language is just a tool of communication. Most words don’t hurt if they are not used against you. But this is not about the language or even about words, but the oppression behind them. So, after my research I felt much more motivated to learn Afrikaans. And already I had learned something and overcame some of my prejudice.

In addition to my inner struggle with the politics around Afrikaans, I learned that Afrikaans is considered one of the easiest languages for English speakers to learn. And looking at the pros that were listed: no gender, no conjugation… sounds like not just for English speakers.

Also, Charlize Theron is South African and a native Afrikaans speaker. And yes, I didn’t know, because I don’t care about people’s private lives… Here is a link though where she translates some Afrikaans sayings:

My thoughts after the challenge

Most of my day went to organizing and checking out materials, so this I could’ve done a bit differently. This is actually the one improvement I hope is made in the future: that you get the language a bit earlier, so that you could collect resources in advance. I get that this was probably the idea, but it restricted one to using internet resources. I might’ve still gone this way, considering that I didn’t want to spend money on a language I didn’t choose. However, I learned my lesson…

My issue with the free resources is that I don’t like most of them. I don’t find them very efficient in learning a language. Well, I don’t know if all the paid resources are that either. I think it’s very hard to create a good self study course. Things are much simpler with a teacher. My problem with most of the free things around is, that they teach you either just words or sentences. I prefer the good old fashion dialogue or an article, which you can translate and it has some grammar points that are then taught. It seems to be very hard to find this kind of material, free or paid. I also need written notes, I can’t just pick up stuff from hearing it, so I need at least the sentences I learn on the screen of the video (or in subtitles or description, but somewhere).

In the end I bought the Colloquial Afrikaans as a kindle book, but while this was something I could actually use (Colloquial offers the audio for free on their site), the format wasn’t optimal. I don’t mind reading my books from my kindle, but With language learning books you need to skip around and this wasn’t that easy in the kindle book. Especially in this one, since there wasn’t glossary for each chapter, but the glossary for the whole book was at the end of the book. I now realize that maybe I should’ve tried if there’s an Afrikaans dictionary for kindle, that might’ve been helpful. But I think if you really want to learn a language from an ebook, they really need to figure out how to link things, so that it’s easy to look up a word and then return to your chapter.

So, in the end I was slightly frustrated and felt I could’ve learned so much more. Maybe I should’ve signed up for the 72h challenge. That might’ve been better anyway, because I do need breaks in studying, so that my brain doesn’t explode. And also this helps me to remember the stuff for longer, when my brain gets to rest a bit now and then. I also realized that instead of looking for the free resources, I should’ve gone straight to the book. I might’ve also considered taking an iTalki lesson or two. But for this also you need a bit of time, because you can’t book the lessons the same day unless you find an instant tutor.

I did end my Language Jam a bit early, but it started to be more frustrating than fun. I think I would need more breaks, a real book and a bit less hot environment (today was a bit cooler than it’s been lately, but still about 25°C… and yes, I’m from the North).

Even though I complain this much, I still loved this challenge! I loved the randomness of the language and the idea of the community and people updating in instagram about their challenges. I even saw someone posting a video in their language. I would need a bit more time to do that (I think at least the 48h challenge), but maybe I try that the next time. The negative stuff was more about things that I did wrong or things that were wrong for me. I should know by now what works for me, and just trust my instincts. I will definitely join another challenge if one comes up! 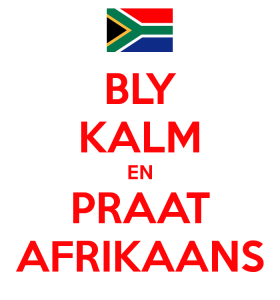 Top 6 Tools for Learning Afrikaans Online! – This is a list of links and I haven’t gone through everything, but it definitely was one of the best lists I found

Learn Afrikaans with AfrikaansPod101.com – Pod101 language course for Afrikaans, these are paid courses, but the videos in youtube are free

UPDATE 6.8.2018: There is now a website specifically for Language Jam!