I went to visit my cousin in Prague and of course I thought of learning a bit of Czech… My last time in Prague was in 1991 (it was Czechoslovakia back then), so it was no wonder that the city had changed a bit… I don’t remember that much, since I was 11 years old back then, but it definitely felt soviet back then. Now, Prague is like any Central European city and you can totally get by with English. But hey, that’s not the point, right?

Well, I kind of woke up a bit late to this desire to learn some Czech, so I was pretty limited in my resources. I thought I would finally try one of these audio based courses and I found One minute Czech. I was also limited because I wanted something I could listen on the way, so the free podcast was pretty perfect. I listened to it several times and I did learn a few phrases, but obviously in 10 episodes of only few minutes each, you don’t really learn much. Also later I realized I heard some things wrong… Which makes me think pure audio is not a good method for me. With the text I can figure out which sound is written which way in this language and it works much better for me. So, I should’ve at least gotten the transcripts that you can buy from the website.

I found out that it was useful just to know Dobrý den, which is used pretty much like Bonjour in France. So when you enter a shop or a restaurant, this is something nice to say. Other than that, I didn’t really have a chance to try anything.  I noticed, though, that Russian was very useful and I understood many things based on Russian. Although there are false friends as well like rodina (family) in Czech  and родина (homeland or native land) in Russian. But so far I didn’t make any huge mistakes. I did love it though, because I was not stressing at all. Anything I could say or figure out was a bonus.

Of course, since I’m a book geek and my cousin took me to a comic book shop. 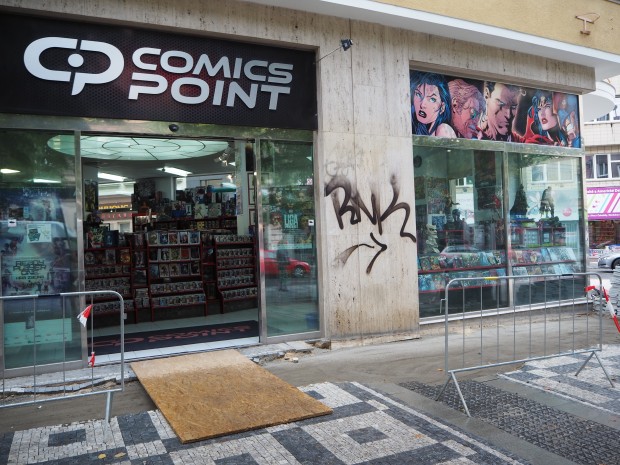 And well, why would I buy something in English when in Prague… So, I decided to get something local and in Czech. This was a bit hard, since I don’t really know Czech, but then again I’ve done this a long time, so I managed to find something.

These 2 comics just looked like something I would enjoy. Not that I would know, since I don’t actually understand them. However, the style and what I saw of the pictures inside, I thought these would be right for me. Well, maybe some day I can actually read them…

So, since I was in Prague, I thought this would be a great place to look for textbooks. My cousin took me to a book store and we found a pretty good selection of Czech for foreigners. I’m pretty picky about textbooks though. I wanted something with a proper “chapter”: as in dialogue or a text, glossary and then some grammar and exercises. I find that most modern approaches don’t have enough text in my opinion and then there’s a whole lot of grammar and the grammar section includes new words. I think this is a horrible approach. Of course one also needs audio, so that the pronunciation won’t become an issue.

I looked at many books, but nothing seemed what I wanted. But then I saw one… Unfortunately it was in Russian. I think I could study Czech in Russian, but I think I would be more efficient in English. But my cousin came to my rescue! She found one in English! 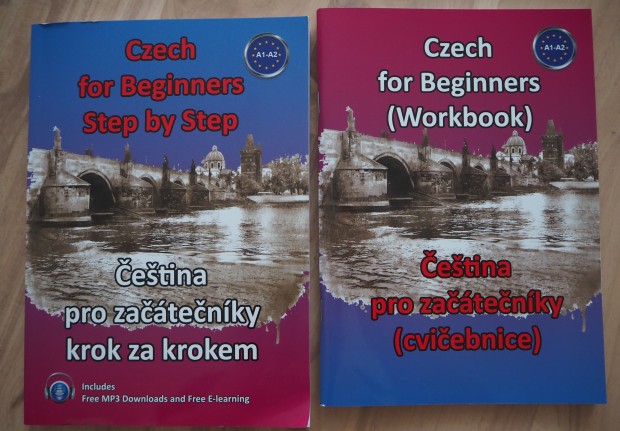 A1-A2 Textbook and the workbook

This looks slightly old fashioned, but hey, that works for me. Below is an example of one lesson, which continues from this, but there’s a whole page of text. And no direct translation, which I hate. The direct translation just makes you lazy and doesn’t actually help your learning at all in my opinion. And with internet today, if you don’t understand something, you have many places to ask.

Example from the textbook (Lesson 14)

The book didn’t come with CDs, but you can download the audio files from internet. This is perfect for me, since I prefer less physical objects anyway, even if I do like my language learning books on paper. I’m actually quite excited to get into this book.

And then I remembered: Czech is where one of my favorite childhood books comes from… I’m of course talking about The Mole, or Krtek (or myyrä in Finnish). This is one of the children’s books that I haven’t given to my sisters, who have children. It’s a well loved book as you can see from the picture on the left…

So, yeah, there was a lot of Krtek stuff around. I just had to buy some. I used to have a plushy Krtek as well, I bought him from Moscow. I don’t know what I did with it, but I’m kind of sad, because I liked it better than any of the new ones I saw now… However, there were plenty of things to tempt me. In the end I got the book with the story of how Krtek got pants, a lunch box and a calendar for next year.

I got a bit excited…

But now I actually have something that makes me excited to learn Czech. Because I REALLY want to read Krtek in Czech. I will be as happy as Krtek with his new pants! With pockets!

Finished pants! With pockets! (sorry for the spoiler, but the title sort of gives it away…)