Why do you study Persian?!?!

This is what people ask when you say you are learning Persian. I don’t know why there’s no other reactions, it’s not like all my other language choices are motivated by reason. In school I studied what was available. Now there’s more choice, but I’ve wanted to concentrate on languages that I have started at some point before. Persian is the newcomer, the one I knew nothing about.

So what made me take it up? Well, at the moment I have quite a lot of colleagues and friends from Iran. This made me think how we only hear one narrative from the news. Things that I hear from my friends are somewhat different. I want to learn about the things I’m missing when  I don’t know this language. And of course Iran has a long history which is interesting. I also like that it sounds so different. The only down side was that it is still an indoeuropean language and I kind of wanted to widen my scope there. But when I was just browsing through teachers in iTalki, I saw one video that made me think this guy would be the right teacher for me. And I was right.

For more general reasons to learn Persian, Fluent in 3 Months has a good guest post on learning Persian.

My way of studying Persian

I’ve noticed that what really works for me with language learning, is to have a teacher. Even if the teacher isn’t that great, it still creates some kind of structure for me. I also then will do the homework and actually learn much more. In Persian, I’ve been lucky with teachers. I started with one and now I have two. This works really well for me, because they have different styles of teaching that actually complement each other and I will have two sources of information, which is important, since I’m only learning to read at this point and I don’t have many extra resources (I don’t like to be limited to one resource).

In most of the other languages I’ve studied I’ve had a hard time finding teachers that work for me. This doesn’t mean they are bad teachers, but more that their style just hasn’t worked for me. My first teacher studies linguistics and I like the way he can explain things to me in an academic level. He understands that I like to understand things this way and he gives me more information on things than to an average student. I like that he pushes me, because he knows I like that and it makes me learn more. My classes with my second teacher are more practical in nature. There’s less input, but what I learn is really solidified with practice and discussion. These lessons are more relaxed, which works really well in addition to my more fast paced ones. I’m also practicing reading with my second teacher. She’s very good at noticing where I struggle and we concentrate on those things. She also gives me audio files of the texts we study, which I really like, since there’s not that many audio sources I can understand.

So far, I’ve mostly just concentrated on my lessons and homework. I also copy the lesson notes by hand into my notebook. This helps me remember words better and I like having a notebook instead of reading everything from the screen.

In addition to my lessons, I listen to a few podcasts, but I don’t expect to really understand what’s going on in them. I mostly listen them to get used to the rhythm of the language and now I’ve started to spot words I know. I listen to news, because the podcasts are not that long and I don’t get too bored listening a whole episode. One of them is tech news and from that I sometimes understand what is the topic of the news, which makes me very happy. I also listen to some Iranian music, for which I’ve gotten recommendations from my Iranian friends.

Another thing I want to start doing is my Colloquial Persian book. I will go more into detail about it below, but so far what I’ve seen, I’m happy with. I hope it will also improve my reading, since all the dialogues are both romanized and written correctly in Persian alphabet. And the audio files of the dialogues are downloadable from the publisher’s website.

Nazanin Mirsadeghi: How to write in Persian 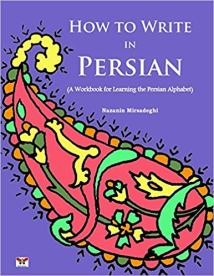 I bought How to write in Persian because I saw some good reviews for it and I wanted to practice writing. I didn’t think it was that great though. I did work through it mostly, but the font was too thick and since I was writing on a pencil, it was super hard to reproduce the letters. Also, Sometimes the model letters were sifted from one row to another and I wasn’t sure on which part of the letter should be sitting on the line. In general the letters to practice were just too big.

I did get an introduction to the letters, but then again, you can just print something from the internet for this. Not a huge fan of this book. 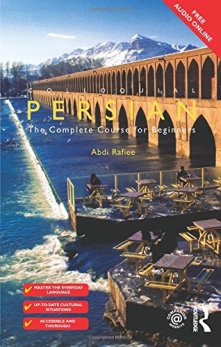 I decided to buy the Colloquial Persian, since I saw several people recommending it.  What I like about the Colloquial series is, that all the audio files are downloadable from the publisher’s website and you don’t need CDs, which can be cumbersome. Of course nowadays I just rip the cd to my computer and after that it works the same way, but this is just easier.

I actually bought the book and it’s been sitting on my shelf… I wasn’t hugely impressed by the Colloquial Afrikaans I was studying for the Language Jam and I was worried this would be similar. I decided to take a closer look at this book. I had taken a look at a Teach Yourself series Persian book before, but I wasn’t convinced. The first dialog/story in that book came in chapter 4… and it seemed similar to the Colloquial Afrikaans where you have a short dialogue and then lot of explanation in English with new words out of context. Not what I like.

This book, however, seems good so far. I’m not sure if the alphabet is presented the best way, but I understand that they don’t want to spend the whole book doing alphabet exercises. The chapters consists of few dialogues (in Persian and Roman alphabet) with translation and vocabulary, and after each dialogue there are some language and cultural notes, not too grammar heavy, but the main stuff is explained. I like the way the grammar is presented with examples from the text. Every chapter ends in a comprehension exercise. At the back of the book there are a key to the exercises, grammar summary, and glossaries (English-Persian & Persian English).

The only thing so far I’m not a huge fan of are the translations of the dialogue. I feel they make me lazy and I learn less when I’m not figuring out myself with the vocabulary what’s going on in the dialogue/text. I get that this might be needed in self study material, but I would prefer it at the back of the book with the answer key to exercises. Now I cover it with a paper so that I’m not tempted to look at it and only look if I can’t make out myself what is written in Persian.

I’m not very far into this book, but I am positively surprised so far and I can definitely recommend this book for self study.

I listen to a few podcasts, even though I don’t really understand much.  The first 3 on the list are news podcasts that are all less than 15 minutes. The last one features Persian music, but the host actually speaks English. I’m not too stressed about understanding anything, I’m using these more to get used to the rhythm of the language and the way words are pronounced. I do try to catch any familiar words.

On an additional note, if you want to listen to Persian music, there seems to be more of it in Sound Cloud than in Spotify. If you would like a starting point, here’s my (quite new) list of Persian music.

I was surprised how much stuff there is in the internet to learn Persian. The problem is in the beginning that it’s hard to use any native sources because of the script. However, maybe those sites are not the most useful in the beginning anyway.

I haven’t used much internet resources, but I’ve found following sites that could be useful. I don’t list everything I’ve found here, just more the websites that look most useful to me or have been recommended to me.