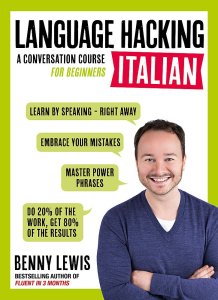 I actually started my Italian studies with this book in September last year. I did the first mission and then I had a bit of a break… Recently I got newly excited about learning Italian and I’m finding it quite easy to learn because I speak French and to some level Spanish. However, when I try to make my own sentences, I get Spanish mixed in…

I thought I would collect my thoughts on what I actually thought about this book as a language learning material. I have to say, I did more or less finish it, so I feel I have a pretty solid base for my opinion.

I started the book by doing all the exercises and missions. I did this for the 2 first missions. After that I started to be more selective, especially since I started working on Italian Uncovered by Olly Richards (from I Will Teach You A Language). My first impression was more positive to what I had thought: I originally had issues with Benny’s website Fluent in 3 months. I realize that the name is a bit of a marketing thing, but I don’t like the claim, since I think you can’t be fluent in 3 months, even if you only study. However, the website has a lot of good information, so I have decided to let my aversion for the name go.

I chose this book when I was browsing at Barnes & Noble and this seemed like the best book available. It had some dialogues and then exercises built on them. I excitedly did the first chapter and was impressed how much I could say in my first mission. For personal reasons I didn’t have time to study more and I only got to more serious study in February this year. This changed my view somewhat on the book.

What I thought while studying

After the first two chapters I started only studying the dialogues, writing the new vocabulary in my notebook and doing the missions. I even skipped the mission 3, because I just didn’t find it very useful. I was basing my more serious study in the Italian Uncovered that seems to be a better fit to my study style. In the end I managed to finish mission 5, but then I just felt like I didn’t want to write about the topics the book introduced. So I decided to concentrate on other sources, like the aforementioned Italian Uncovered.

I really didn’t like the way the book glosses over grammar: you don’t need to explain ALL the grammar, but I hate how minimal it is. On the other hand, some people might find this a plus. I, however, went for other sources for grammar. For example, I hate, when the different verb conjugations are not explained from the beginning. Here we first got the conjugation for I and and then the other forms (you, he/she, …) came in later chapters. This annoys me a lot.

I was a bit annoyed that on lesson 4 (in a book that only has 10 lessons), the conversation is still basically “hi, how are you?”. I feel like in such a short book, this could’ve been skipped at this point. in general I think there could’ve been more vocabulary in the dialogues.

I didn’t like all the missions, some were a little bit shallow in my opinion. I guess if you really use this as a talking guide, then maybe, but I ended up skipping the one where you need to describe a thing you don’t remember the name of. I guess it’s a good lesson if you never thought of it, but I’ve lived abroad enough, that I’ve figured this out. I’m looking more specific information from my language books. Also, I managed to do the missions only until mission 5.

Minor thing, but if you actually try to write the answers in the book, the space is not very big. The space is the same for a tiny word with 2 letters and a long one with 14. I get that they want to make these the same size, so that you have to think which word to put in which, however, there would be space for all of them to be a bit bigger. From chapter 3, I started doing these only in my head.

I really liked the idea of the missions and the idea of producing the language yourself from the very beginning. I’m not an extrovert, so I find this part a bit harder, I didn’t like making videos, but I think this made it easier actually.  I also use the audio from them with LingQ where I have my text that I’ve originally posted in iTalki notebook to get corrections, so the text should be correct (more or less, depends of course the quality of the correction).

I think Benny Lewis’s method is better as a general guideline than it is as a language learning book. But I do think it’s a good idea to learn to talk and start to talk as soon as possible. I’m not quite comfortable to start as early as Benny himself is, but I have noticed, that starting to speak improves things. Also, I do agree that you don’t have to be perfect to speak. However, I do think you should be thought “perfect” language.

The method reminded me of the book I read that was recommended by Anthony Lauder. This book was How to Improve Your Foreign Language Immediately by Boris Shekhtman, which is based on Shekhtman’s extensive teaching experience, teaching Russian as a foreign language.  One of the points in his book is to build islands of topics that are familiar to you and learn vocabulary for them and then if the talk turns to something you don’t understand, you can try to turn the conversation back to one of your islands. This book is all about building your islands.

I do like the idea of the missions. And I think I will modify them a bit for my own use, but I will try to do these for any language I study. I just have to learn the vocabulary and to figure out how to say everything, post it in iTalki notebook (or somewhere similar) and take the corrected version and read it to a video, or even just audio, because the video is not necessary. If I have trouble with the pronunciation, I might have an iTalki teacher read it for me, so I get the correct pronunciation. But it’s also good to hear yourself talk.

I feel the actual language information was a bit shallow, however, as an idea where you actually use the language yourself and write/talk about things yourself, I think the idea has merit. So, definitely keep doing this with my other languages, but I see this more as a method than anything else. I got most out of the scripts I wrote myself and had them checked by a native speaker and then recording myself speaking them. This is the meat of the book in my opinion.

So, all in all, I don’t think you get very far with this book, but it does introduce you to a new way of thinking about language learning. I like the idea of making your own sentences and actually using the language. Also, the recordings make sure, that I actually practice speaking. And if you have issues in pronunciation, which is not the case in Italian for me, it might be useful to go over these with someone who knows how to pronounce things. Like have a few of them done and then do a lesson.

TL;DR: This book was not for me, but if you find language learning daunting, this might work for you. The missions are a good idea and I do like how things were made approachable. I just like a bit more information for my learning.