My background in Japanese

I used to study Japanese. That was about 12 years ago… I first took all the courses offered in the Helsinki open university, which in Finland means that you can study university courses by paying a small fee. However, what they offer is limited. Then, I started studying physics as a full-time student again, and I tried continuing Japanese. However, since for where I was, I could only continue with the courses for people majoring in Japanese. And they had intensively studied the material for a year, while I did some months in the open university…

My old Japanese books I studied with, way back in ~2008

This lead to me quitting… Mainly because it was 6h/week or nothing. I was doing Japanese homework for 2h/day and I was barely keeping up. In addition, the lessons were at the same time as my main physics course, where I also really needed the lessons. And I was working part time still. So, I just didn’t have enough time and energy. And since Japanese wasn’t my main concentration and it was the one subject requiring way too much of me, I decided it had to go.

Since then, I’ve felt a bit sad, because I got to a decent level, I just never thought I could actually get studying on my own. About 1.5 years ago, I did try restarting with iTalki lessons. I had issues finding a teacher I liked though, especially since the most interesting ones seemed to be in a time zone that wasn’t compatible with me studying Japanese. Also moving from Germany to US sort of made a break for my language learning. After, even though I really want to learn Japanese, it’s been difficult for me to restart it, because I feel like I already reviewed a lot and now I would need to start again from the beginning. And I know it comes faster the second time around, but still… Review is not one of my strong points…

My efforts for review

I’m great at planning. I really am. The difficulty is to follow those plans… So, I had lots of plans to restart my Japanese. Mainly involving my old book, since I couldn’t find really anything better and it had the additional benefit with the supplementary material from my university studies, with chapter vocabularies and grammar explained in my native Finnish annotated with my notes from the lectures (the book itself is in Japanese only).

However, I find review a bit boring… in addition the issue with this book is that I finished it already. And now I would need to pick it up (again) and go through it (again). And while it’s not necessarily boring (at least not more than any beginner book), the fact that I already studied it once makes it so.

There is a LOT of material in Japanese, but most of them seem to be fairly light in the actual learning content, so I wasn’t really interested in any of them either. My old book at least covers a fair amount of material. But I just wasn’t picking it up. The same with my kanji book: while it was the one I liked best of what I’ve seen, I just have a hard time going back to it. With kanji, the additional issue is that while I would love to have a few resources, it’s hard to mix them, since they introduce the kanji in different order.

My thoughts on Language practice pad for kanji

I actually found this Language Practice Pad for kanji in my local Barnes & Noble that I thought was a neat idea for learning kanji. I definitely prefer to write by hand and this was offering it.

It also had 334 kanji that seems like a good beginning amount and I liked the idea doing one of the pad leaflets per day for about a year, with maybe some review in between. Also, if I wanted to use another source, this could be just some fun practice and I wouldn’t have to take it too seriously.

Well, I finally started this yesterday and I thought I’d share a few thoughts about it. I still very much like the idea and might keep using this as a way to practice, while not super efficiently learning the kanji this way.

Here are the introduction pages to the pad: 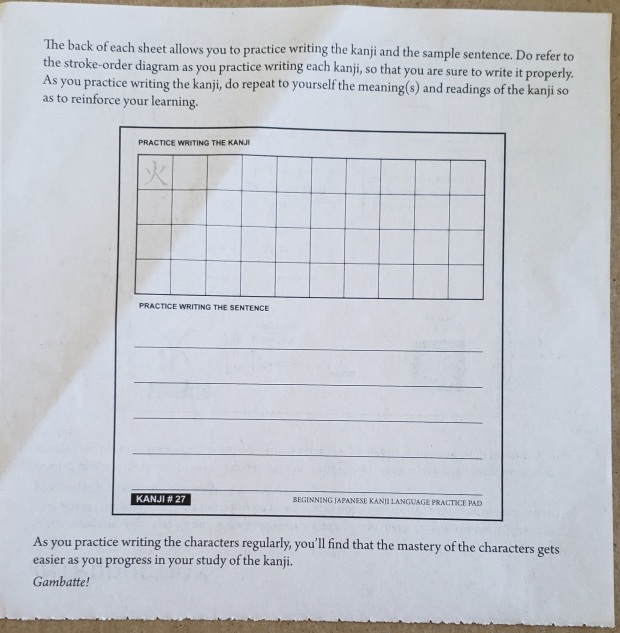 Basically this introduces the kanji and the readings of it. It gives you the radical which is important, especially if you’re using a dictionary. It introduces some vocabulary where the kanji is used, so you can see the context and also gives you a sample sentence with an English translation.

My experience so far

So far I’ve only done 2 sheets from the pad, but I think I have a pretty good idea for the pros and cons of this resource, at least what comes to my preferences. I have practiced the 2 first kanji: country and person. These seem like kanji that one would encounter quite often, so that seems like a good idea. I will add here the pictures of my first 2 filled out sheets and I will comment them below. Note, that I am not trying my hand in calligraphy, I just try to write the kanji in a way that they would be legible for a native speaker reading what I wrote.

Front of the first 2 sheets

Back of the first 2 sheets

I like, that the whole pad is very compact. You could have it out on your desk and start your day with practicing your daily kanji. I like that they introduce the radical as well as the stroke count. Both readings and meaning in English are included and also I really like that the kanji is put in context with the common words it’s used in and also the practice sentence.

Even if the pad is compact and there’s not really extra space, the sheet doesn’t feel crammed. There is enough space to show the stroke order of the kanji and also for me to practice writing it myself. Obviously there could be more space for practice, but then again you can always do this with a notebook if you like. I also like that there is specifically reserved space to practice the example sentence they give. I feel this gives the kanji some needed context.

The paper is very thin and even with my ultra fine pen (0.38 thickness), the pen bleeds through to the other side. I get that the paper can’t be super thick, but I think a tiny bit more thickness would make the experience more enjoyable.

I don’t like that the readings are given in romaji instead of kana. I feel like if you’re learning kanji, you should be comfortable enough with hiragana and katakana, that you could get the readings from them. I never really used romaji, so I just find the transliteration confusing.

I also don’t like that the sample sentence uses kanji that you don’t know. At least the furigana should be given above or under the kanji. I prefer to practice kanji properly and writing kanji you haven’t learned is hard and can give you wrong stroke order and just bad habits in general. I’d prefer to write the sentence in kana except for the kanji I’m practicing (and any kanji that I’m supposed to have learned previously).

I feel like this could be a really great way to learn your first kanji. I’m mostly annoyed by the use of romaji and having you write kanji you haven’t learned yet. And these are pretty big flaws in my book…  So far, I think I will keep using it, though. Partly because I already bought it, and it can’t really hurt, and partly to just have something to practice with, and I really do like the format.

Fixing these little details (at least the use of romaji if not the thickness of the paper), would really make this a standout product for me. I might still write the kanji to my notebook with the sample sentence after I confirm the kana for the unknown kanjis.

Because I’m finding the review on my own very difficult, I decided to look for an iTalki teacher. Well, at first I just thought to get a half an hour more so that I can get a full hour to the iTalki challenge that is currently on the way… So, I booked a teacher for 30min to kind of kickstart my review. And it helped, I actually started to review before the class.

However, I’m worried that especially with the other languages I’m learning at the moment (Italian still, and a new acquaintance: Basque, more about that later…), I won’t make the time for the review, since I just dislike review. And because the teacher seemed pretty good, I decided to book some further lessons with her. This means a new book (she uses Genki), but what I saw from my search online, it doesn’t look too bad and even starts introducing kanji in the first book. Also, while obviously the beginner themes are similar than in my old book, it’s still a new book and I hopefully won’t be too bored with it.

The teacher also seemed very amendable to modifying the lessons a bit and going faster if she sees I understand the content and slower if I have problems. I would also like to study the chapter in advance and the grammar also, so we could concentrate more on the practice at the lessons and obviously on any questions I might have about the grammar or vocabulary. So far I booked 5 lessons, so I think after those I will see if I like this teacher well enough to continue or if I should find someone else. Right now I think she seems very promising.

I’m really hoping the review part will be fairly quick and I can actually get to start learning new things soon. Also Aggretsuko. I think watching Aggretsuko only in Japanese is my main motivation at the moment 🙂